Making it easy to get around

Vaughan is the only urban growth centre in the Greater Toronto Area, outside of Toronto, that has subway access and an award winning intermodal transit system.

For those who travel by car, Highway 400 and 407 ETR border the VMC, while Highway 7 runs through the middle.

Refer to the image below for passenger pick-up/drop-off and parking locations. See the VMC Parking Strategy for information about future parking plans.

Working effectively with York Region, SmartCentres and the Toronto and Region Conservation Authority, the City has constructed and opened the following new roads in the VMC’s northwest area: 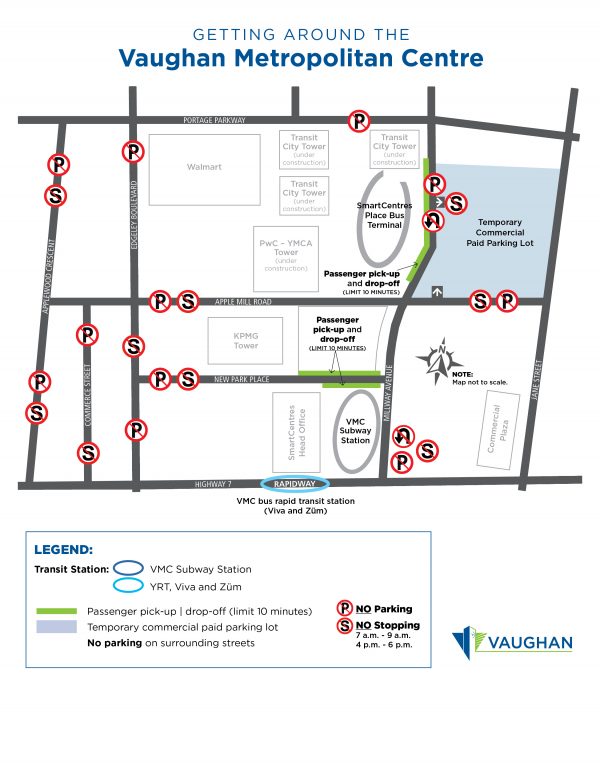 The VMC is a quick 5-minute subway ride to York University Station and a 45-minute ride to Union Station.

To escape the weather, pedestrians can take the underground pathway that connects the subway station, vivastation, and SmartCentres Place Bus Terminal.

It is connected to the VMC Subway Station and VMC vivastation

Bike lanes and bike boxes are already on Highway 7, Millway Avenue and Apple Mill Road, and will be expanded as the VMC builds out. Active transportation—including walking, biking, and other options—are an important part of the VMC’s vision and will continue to get easier.

Active transportation—including walking, biking, and other options—is an important part of the VMC’s vision and will continue to get easier.

Get the latest VMC updates and event listings by signing up for the Vaughan Economic Monitor eNewsletter.